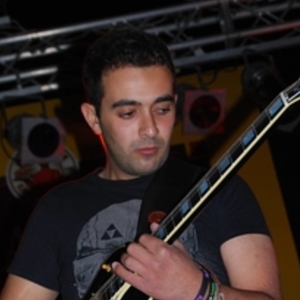 High-energetic guitarist, passionate and inspiring tutor, with more than 10 years of experience in the music industry.

There is no such thing as a definite approach. Andrea's approach is personalised to the needs of each student, based upon the following key factors: Age, Capabilities, Hours available for the student to practice at home, and the student's goals. It is not a secret among musicians that talent would be only the 10% of the whole, whilst the rest 90% is derived from student's systematic practice. Some specific practices will also be a part of the learning environment and plan. Andreas believes that to grow instrumentally, a student should also grow musically. This does not only include aural exercises, and/or music theory & analysis, but working on the critical thinking of the student based on literature, writings or discussions in academic circles. This may include various philosophies in music's role in everyday life, psychology of music, philosophy of education and more. For Andreas, it is of utmost importance that a student would search for his personal feelings when performing a piece of music, expressing them through their playing, making each performance a unique interpretation of a musical work. In addition, the students will have the opportunity to choose their genres of main focus, as Andrea's musical vocabulary ranges from classical, contemporary, rock, blues, bluesrock, rock & roll, fusion, ethnic, folk, country and metal.

Andreas Pavlou is an instrumentalist and composer born in 1994 in Larnaca, Cyprus, currently living and working in the UK. Born in a family with long musical tradition, Andreas took his first steps in music education at the age of four, studying violin with Stefanos Zymboulakis. He also studied piano, classical guitar, electric guitar and music theory in the Classical Conservatory of Larnaca under the tuition of Marios Pavlou. Graduated from Royal Holloway University of London in 2017, he studied composition with Dr. Mark Bowden and specialized in electric guitar Performance under the tuition of Nick Hollings, whilst now he is undertaking his Masters Degree (at Royal Holloway) specializing in Performance under the supervision of Dr. Mary Dullea.

Andreas’ orchestral experience began from an early age as a member of Larnaca’s Violins Orchestra, for which he will lead the first violins by the age of fourteen. At the age of eighteen he joined the Military Band of Cyprus for which he served as a second trombone, as well as bass guitarist in the “light” folk orchestra of S.M.E.F (Military Music of National Guard). He was also a member of the Royal Holloway Symphony Orchestra under the baton of Rebecca Miller.

Despite his heavily ‘classical’ influenced education, his passion for electric guitar and popular music culture was expressed from an early age. Studying electric guitar with Pavlos Chrysanthou and later on with John Savvides, Andreas started working as a session lead guitarist and studio recording guitarist at the age of fifteen. He was the co-founder and lead guitarist of the rock bands Virtus, PLAN B, and Zmepherz touring in Cyprus, and has collaborated with various artists including Andreas Moyseos, Demetris Mesimeris, Nicolas Savvides, Kyriacos Shionis and Marios Panayi. One of his latest collaborations was with Michalis Georgiou, recording both the bass and electric guitars for his debute album " Ta fota tis skinis” (trans. Greek).

The combination of these two “worlds” was to formulate his latest project, for which the classical repertoire of many instruments is transcribed on electric guitar. His ongoing project, namely “Performing ‘classical’ repertoire on electric guitar”, is aiming to provide an insight of the particular style to both academic and popular cultures. The project focuses in building repertoire for the electric guitar, proposing that the instrument should be inducted in the Western Classical music instrumentation, encouraging contemporary composers and performers for further experimentation with the instrument’s capabilities and soundscapes. His Masters, as well, was a part of this project, focusing not only in the field of performance, but in the educational ways of introducing new practices and techniques in this subject area, based on current academia discussions on performer-composer interrelation and personal interpretations of compositions.

P.S Tariffs may vary if needed to travel (depends on the distance as well - discuss with tutor)
Cancellation policy: Unless an extremely urgency, the student should cancel from 24 hrs from before the lesson. Otherwise payment will be requested. If you have a timetable that does not comfort you with specific free hours, then please discuss that at the very beginning of the lessons' plan to avoid such situations.