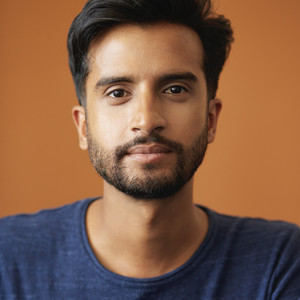 Hamza is one of our best tutors. They have a high-quality profile, verified qualifications, a quick response time, and great reviews from students!

Hi, my name is Hamza. After graduating from The Royal Central School of Speech & Drama in 2010, I have worked extensively across television, film and theatre. I have featured in leading and supporting roles in shows for BBC, ITV, Channel4 and internationally for ABC and CBS. These include Doctor Who, Luther, Our Girl and Zomboat!
On stage, I have featured in plays at numerous theatres including The Royal Court and The Young Vic.

I love learning and teaching the craft. Since 2017, I have been working as an Acting tutor for a leading London vocational academy and coaching privately. I work with students with different levels of experience and different goals including beginners, audition coaching, role preparation and even public speaking.

I teach methods I use professionally, based on simplicity and play, allowing students to explore truthful performances in a safe and friendly environment.
My approach is based on a 3-Step Foundation technique which I tailor to each student's specific requirements.

All of our reviews are collected by us and are 100% reliable. They correspond to a real experience lived by the students of Hamza.