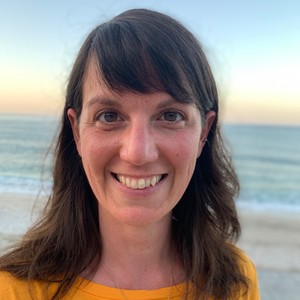 Dimitra is one of our best tutors. They have a high-quality profile, verified qualifications, a quick response time, and great reviews from students!

I am a native Greek speaker with a PhD in Linguistics.
I have been teaching Greek for the last 15 years.
My experience has not changed the enthusiasm I show in teaching every new student!

I charge £50/hour for 1-to-1 tuition in Modern Greek (travel to be discussed).
I also teach small groups.

I teach mainly at students' homes in London or at other convenient locations. I am willing to travel anywhere in London up to 4 zones.

I am available every day and time of the week, Monday, Tuesday, Wednesday, Thursday and Friday and, possibly, on the weekend.

I teach a range of ages that encompasses both very young children (from 3 years-old) and adults (up to 70 years-old).

Modern Greek: I teach all levels: Beginners, Intermediate, Advanced, GCSE, A level, and any other tailor-made level required.

I can arrange a comfortable online tutoring via skype.

I am a native Greek speaker, who has worked as a linguist in Barcelona, Spain (2004-2009) and in London, UK (since 2011). I enjoy languages and I am dedicated, as a linguist, to the study of the universal and particular features they have. My approach to teaching has been informed by my theoretical research, which has helped me sharpen the methodology I use. I have elaborated rich material for all the levels I teach and I always seek to adapt it to the needs of every student, be it an adult or a child. I enjoy teaching, because it is a great opportunity to communicate with other people and share some knowledge in an exciting way!

Students: mainly English and Spanish speakers, but also including French, Catalan, Japanese, Albanian, German and Jewish speakers
Levels taught: mainly Beginners, some Intermediate and some Advanced
Degrees obtained by students: Certificate of Attainment in Greek (Level A, B, C)

I also have 5 years of experience of higher education teaching at several UK universities, in London (Queen Mary, UCL, University of Greenwich) and in Cambridge (University of Cambridge). Subjects include under- and postgraduate courses in Linguistics, Semantics, Pragmatics and Acquisition of Language.

Yes, I have an up-to-date DBS/CRB Certificate.

My current students include
- a 10 year old boy, whom I’ve teaching for 5 years now, born and raised in London by Greek parents
- a Scottish 72 year old woman, who loves Greece and has been going to a Greek island for her summer holidays for the last 30+ years
- 1 English woman who is learning Greek because her partner is Greek
- 1 Catalan woman with a Greek partner who is learning Greek to speak to him and their daughter who is 2 years old

Former students include two groups of children (4 and 7 years old and 5 and 8 years old), who are second generation Greeks and were born and raised in London. We are approaching Greek through exciting games, drawings, songs, etc.
Another group of two teenagers (14 and 16-years-old), who have begun their preparation for the GSCE in Modern Greek.
A Maths teacher with Greek origin (30 years old), who decided to refresh her Greek.
A Norwegian-born, London located adult who is currently learning Greek in order to be able to talk with his partner.
A second generation Greek adult who had never had the chance to learn Greek before and would like to go to Greece to work.
Two English people who have houses in Greece and want to be able to communicate with their neighbours.
An English woman who is getting married to a Greek man and wants to learn more about Greece and its culture.
An English woman married to a second generation Greek who wants to learn and transmit Greek to her children.
An English student of medicine who wants to go to Cyprus to study for his year abroad.

discounts to be discussed for a package of lessons