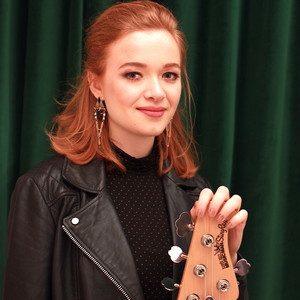 My classes are tailor made to the individuals needs and goals. Learning music is about having fun and my aim is to make people feel inspired and empowered whilst providing them a skill set of their own.

The following topics are an example of what can be covered in lessons:

Alex Malseed is originally from Northern Ireland and now lives in London working as a professional session musician. She has toured all over Europe with various Artists and also works on an international composing project called ‘History Of Clouds’ doing tours around India and Bangladesh.
Alex currently plays with many different independent Artists performing live at shows, recording in renowned studios and taking part in writing sessions.
Previous Artists include Natalie Gauci (Australian Idol), Rock band Gaygirl, Mckenzie Brown (Disney High School Musical Film) and KUSH from Shipwrecked.
She has also performed on and offstage with musicals 'School Of Rock' and touring Tribute Stevie Wonder Show 'Signed, Sealed, Delivered'.


Alex has taught privately for 7 years, teaching young people from ages (8 years) to older adults (50+ years) all with different abilities and some with learning difficulties.
Alex has also taught at a non profit music camp called Girls Rock London as a bass tutor and band coach. This camp encourages women, girls, trans and non binary folk to gain confidence through music.

All of our reviews are collected by us and are 100% reliable. They correspond to a real experience lived by the students of Alex.