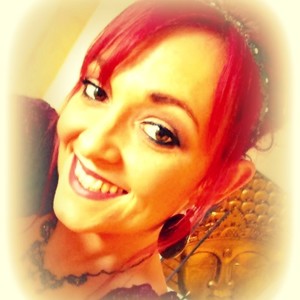 The Transformational Truth of Tarot - Learn How To Live The Rhythm of Life.

Tiffany Crosara has been professionally assisting others to clearly identify their blocks and work through them for over twelve years.

Her first book, ‘The Transformational Truth of Tarot’ won the Best Spiritual Book Award of 2012. In her first year of TV work Tiffany was awarded Best Newcomer TV Intuitive of 2013.

She then followed this up with an award in 2014 for ‘inspiring human potential and assisting people to make better life choices’.

As one of the leading Tarot teachers in the world, she’s a co-author of ‘Tarot Masters’ published by Hay House. Her latest book, ‘The Transformational Truth of YOU!’ was released on 25th September, 2015.

1) She painted a picture that her mum had previously painted... yet, Tiffany had never seen her mum’s painting.

2) She laid eyes on the Tarot for the first time.

3) She had an experience with physical mediumship.

Growing up in the relative seclusion of the countryside, as an only child, in a single parent household, childhood was a solitary experience for Tiffany, with only supernatural experiences providing company.

Although, Tiffany was surrounded by spiritual healers, trance mediums and general psychics from a very young age, but it was often hidden from her. This meant she learnt a lot the hard way, through her own confusions, ‘mistakes’ and experiences. When she was nineteen and pregnant, she saw in the Tarot that she was to lose the child. Believing that if she ignored the reading, it wouldn’t happen, she turned her back on the Tarot. When it transpired, Tiffany began confiding to people that she had foreseen it in the Tarot, and they often responded by asking her to read for them. At first she resisted, but as the requests continued, she began to wonder if part of her path was to help people learn how to work with the rhythms in their lives, and ride the waves, rather than fear them - and so she began a journey of spiritual and psychic study.

Tiffany had encountered loss from an early age, but at twenty, she began to experience loss on a whole new level. By twenty-two, she’d endured the loss of her four month old daughter, her father figure, and went through her first divorce, all in the space of eighteen months. These experiences marked the beginning of her own spiritual transformation and she became housebound with illness brought on by severe stress. Today, she remains grateful that she found Reiki, or that Reiki found her, as it set her on a deeply profound healing journey. A few years later, at twenty-five, Tiffany opened her very own holistic centre in London where she practiced readings and healings and taught the psychic arts.

At twenty-eight, Tiffany experienced further, deeply traumatic spiritual initiations - losing more loved ones, spontaneously remembering past lives, and recognising the people within them. This was the catalyst to closing her business, ending her long-term relationship, and making herself homeless, all in the space of one week. Up to this point, Tiffany had been quite neutral and hadn’t altogether settled on her philosophy concerning past lives, however this experience altered her perspective and led her to train in Past Life Regression Therapy. Just four months later, Tiffany met her husband, and began a life where she felt truly, deeply loved. The day they went on their first date was also the day she began working as a psychic at Mysteries in Covent Garden where she eventually worked for several years.

Seven years later, in 2012, events repeated (a seven year cycle), and another deep catalytic journey began. Again, full of spontaneous past life remembrances and two deaths in one month - of a male friend who was like a father, and her actual estranged father. At the same time Tiffany was propelled into the public eye, appearing alongside the likes of Rachel Pollack, Emily Carding, Sasha Fenton, Diana Cooper, Sonia Choquette, Judy Hall and Stewart Pearce. This was mainly due to the recent publication of her first book, ‘The Transformational Truth of Tarot’ which won the Best Spiritual Book Award of 2012.

Following this, Tiffany began appearing at Tarot conferences, writing for magazines and reading Tarot ‘live’ on TV where she won an award for Best Newcomer TV Intuitive of 2013. The next year, she gained an award for ‘inspiring human potential and assisting people to make better life choices’ and in 2015 won a scholarship with the Coaching Academy, and went on to publish her second book, ‘The Transformational Truth of YOU!’ She’s also one of the co-authors of ‘Tarot Masters’ published by Hay House in November 2013.

Tiffany lives, breathes and embodies her path knowing that we’re all on it, and we’re all doing our best…none of us are perfect, or we wouldn’t be here. She believes that being real and open is the only way she can truly help others with self-acceptance. Being psychic doesn’t necessarily mean you’ll always make the right decisions in life, she’s also learned that being psychic and having low self-esteem can be a very dangerous place to be. This led her to ensure that the development of self-love, self-esteem and self-worth are the foundation of her practice.

With a strong understanding of the importance of honouring the rhythms of life, and validating the imagination, Tiffany experiences a phenomenal amount of synchronicity. The majority of people that work with her also experience an increase of these incredible occurrences in their own lives.

As a charismatic, quirky, creative thinker who’s an accomplished personal and spiritual development coach, when speaking, she believes in the power of engaging the audience in mind-blowing exercises to achieve instant and enlightening results. Over time, people will forget what you say, but they’ll never forget how you made them feel, and with this in mind, Tiffany has a truly remarkable and magical way of ensuring that people come away with eye-opening insights, discovered not through her knowledge, but through their own contemplative reflections.